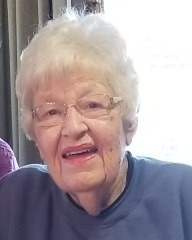 Thelma was raised in the Rochester, New York area along with her sister Connie. She graduated from the Irondequoit Schools, and later attended Baldwin Wallace College. She majored in Foods and Nutrition and received her Bachelor of Science degree in 1954. She was also a member of Alpha Xi Delta Sorority.

Thelma completed her dietetic internship at St. Luke's Hospital in Cleveland. She went on to work in many locations as a dietitian, retiring in 1994 from St. John Westshore hospital. Thelma settled in Avon Lake in 1951, moving from Lakewood. She is a longtime member of Avon Lake United Church of Christ, becoming a member in 1958. She was active in her church and community, serving as a Stephen Minister and a board member of Beach Park Tower.

To order memorial trees or send flowers to the family in memory of Thelma Usher, please visit our flower store.