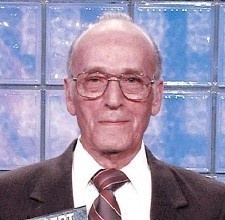 Robert (Bob) H. Fields, 97, a lifetime resident of Lorain County, died peacefully in his sleep at Ames Hospice of the Western Reserve in Westlake. Mr. Fields was born August 31, 1925, in Lorain, OH to Harvey and Laura (nee Fugua) Fields. Mr. Fields was the third born into a family of 10 siblings.

Mr. Fields served in the U.S. Navy from November 13, 1942, until he was honorably discharged on October 25, 1946, in Seattle, WA. He was a Seaman First Class stationed in the Asiatic-Pacific aboard the USS Yorktown. His assigned duty during WW II was the gunners first mate, although he especially liked working in the galley because he got to eat first. He was considered one of 80 crew members to be a plank member. He was commissioned to put the USS Yorktown in the water and then decommission the ship at the end of the war. He was awarded 7 stars, a good Conduct Medal, and the Victory Medal.

After the war, Mr. Fields married Jeannette Legiel (passed in 2016). In the 25 years together, they had four children, Dr. Pamela Fields (Robin Quaile) of Ca., Michele Stevenson (Dennis) of Phoenix, AZ., Robert D. Fields (Irena) of MA., and the late Cort Fields (passed 2018).

He is preceded in death by his parents and sisters Doris Ratcliffe of CA., Judith (Betty) Sobczak of CA., Lois Banones of OH., Carol Chandler of FL., and two brothers Richard Fields of CA. and Ronald Meermans of OH.

Visitation will be held on Tuesday, September 20, 2022, from 10am-11am, with a Celebration of Life to follow at BUSCH FUNERAL HOME 114 Second St., Elyria. Burial to follow at Brookdale Cemetery.

To order memorial trees or send flowers to the family in memory of Robert Fields, please visit our flower store.