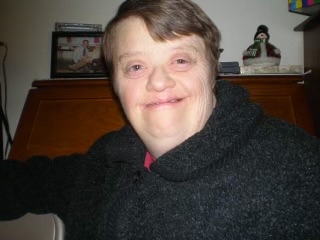 Lorraine attended Murray Ridge School, and then worked in their workshop for several years until her retirement. She was an avid bowler, earning numerous trophies, and competed in basketball and swimming in the Special Olympics. Lorraine was a NASCAR fan, following the races of Jeff Gordon and Dale Earnhardt, Jr. especially close. She was also an avid Cleveland Indians fan, and she loved to dance.

Family will receive friends on Sunday, January 22, 2023 from 3:00pm to 5:00pm at Busch Funeral Home, 163 Avon Belden Road, Avon Lake, OH 44012. Funeral service will follow on Sunday at 5:15pm at the funeral home. Private entombment will be at Resthaven Memory Gardens.

To order memorial trees or send flowers to the family in memory of Lorraine Clark, please visit our flower store.