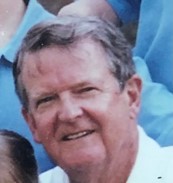 Born in Philadelphia, PA to Joseph P. Fegen and Alberta M. Fegen on December 19, 1937, and raised in Rocky River, Ohio. Pete graduated from St. Ignatius High School, Cleveland, Ohio in 1955 and from John Carroll University, Cleveland, Ohio in 1959. He was a founding brother of the IXY Fraternity and was awarded The Robert Beaudry Man of the Year, 25 years after his father won the same award. He then attended Cornell University Medical School, graduating in 1963. After completing his training, Pete was drafted into the U.S. Army, serving in the Republic of Vietnam as a Captain in the Medical Corps. From 1966-1967. After Vietnam, Pete returned to Cleveland and began his career as a Urologist on the west side of Cleveland where he proudly served with his wonderful partners and friends at North Coast Urology.

He met the love of his life Carol in 1956 while a student at John Carroll. They were joined in holy matrimony in June 1963- a union of 58 years that saw two children and five grandchildren.

Pete was a devout Catholic and was active in many parishes over the years both in Cleveland and in Sarasota Florida where he and Carol lived during their retirement years. Family was paramount to Pete and he always made time for his children and grandchildren rarely ever missing a single hockey, lacrosse, basketball, rugby match or regatta. Pete met regularly with his buddies from St. Ignatius and John Carroll over the years for lunch or golf.

Pete was an avid sailor, and member of the Cleveland Yachting Club for the last 48 years. Only second to sailing was his love of golf and traveling. He and Carol visited many countries and most states over the years. His spirit and adventure lives on in his children and grandchildren.

To order memorial trees or send flowers to the family in memory of J. Peter Fegen, please visit our flower store.
Send a Sympathy Card