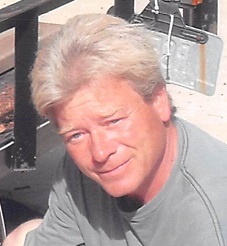 Douglas E. Staylon, age 60 of Elyria, passed away on Thursday, August 19, 2021, at home under hospice care after putting up a gallant fight against colon cancer for the past three years.

Doug was born on May 21, 1961, in Elyria to Emery and Marion Staylon. He attended South Amherst and Southview High Schools.

Doug's main interest in life was his woodworking shop. He was always available to teach, repair, or create anything made of wood for anybody. He could always be found in his woodshop, summer or winter, working on projects. One of the highlights for him was teaching a Cub Scout troop about woodworking and safety which appeared in an article in the Chronicle Telegram. Doug also retired from Invacare as a fixture maker after 32 years of service. He was a veteran of the Ohio Army National Guard, where he distinguished himself among his peers.

Doug's other great love was his wife, Rita, whom he met at Invacare. They loved spending time and working on projects together with Doug eager to do anything to make Rita happy. They were inseparable to the end.

Doug's final wishes were to not have a formal funeral service but rather your own private celebration of his life and your friendship. Condolences may be made online at Busch Funeral Homes which will be handling his final burial requests.

To order memorial trees or send flowers to the family in memory of Douglas E. Staylon, please visit our flower store.
Send a Sympathy Card