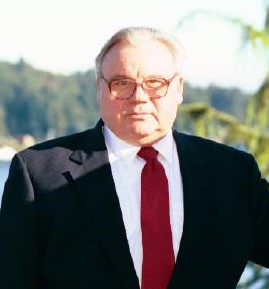 Constantin was born in Romania and spoke a number of languages.  He also lived in Germany before he immigrated to the United States at the age of nineteen.  He became a naturalized citizen of the United States and was proud to be an American.

Constantin married Judith Elliott.  They had two daughters and were married for over thirty-five years.

Early in his career, Constantin worked as a tool maker.  He later earned a bachelor’s degree in engineering from the University of Kentucky.  His first job as an engineer was with Boeing and he designed a part for the Boeing 747.  He also worked for Allis Chalmers in Portland, Oregon and became licensed as a Professional Engineer.

Constantin loved nature and the Pacific Northwest.  He enjoyed hiking, canoeing, boating, hunting, and fishing whenever he had the opportunity.

During his lengthy retirement, Constantin lived in the states of Oregon, Washington, Ohio, and Michigan.

Constantin greatly enjoyed playing chess and competed in chess tournaments until his late seventies.  He won a game against a national champion during a chess tournament.  In addition, he coached chess for young learners for several years.

He is preceded in death by his parents Vasile and Marguerita (nee Adrian) Etingher, sisters Theresia Brockman, Stefania Smith, and Julianne Chittum, and brothers-in-law Jim Bain and Bill Barber.

The family appreciates condolences extended to them.  Final arrangements are facilitated by Busch Funeral Home in Avon Lake, Ohio.  A private memorial service will be held for the family at a later date.  Interment of ashes will be held privately in Alexandria, Kentucky. www.buschcares.com 440.933.3202

To order memorial trees or send flowers to the family in memory of Constantin Etingher, please visit our flower store.
Send a Sympathy Card