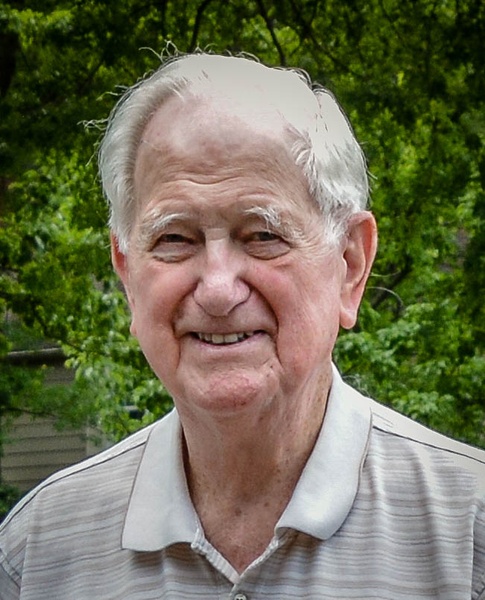 Ben R. Larson shuffled off this mortal coil on August 1, 2022. He was 96 years old. He'd been a robust guy, healthy most of his life. But this last year was hard on him, and he was tamed by an unfortunate constellation of rare and tough to beat illnesses. Ultimately, he was unable to shake the non-COVID pneumonia that ended his long and wonderful life.

He died at Ames Family Hospice House of the Hospice of Western Reserve and was beautifully cared for and comforted by the women who work there, mainly the incredible Denise who made his final days so beautiful.

Ben was born in Bloomington, Illinois in the fall of 1925.

His Depression-era upbringing made him a stoic, Midwestern utilitarian, who looked life square in the eye and confronted every challenge with intelligence, optimism, and humor.

He enlisted in the Navy in 1943 and was honorably discharged with the rank of Ensign in 1947.

After his service in Norfolk, VA, he enrolled at the University of Virginia and graduated with a bachelor's degree in Naval Engineering.

While in Virginia, he met a pretty girl named Betty Ann and was instantly twitterpated. They married within the year and his beloved wife of 67 years survives him, heartbroken but unfailingly grateful for the wonderful life they shared.

Ben joined the American Electric Power Company in 1956 as an engineer for Appalachia Power in Charleston, WV. He moved to Canton, Ohio as an engineer in 1962 and was promoted to design supervisor in 1966. In 1968, he was promoted to manager of the Station Engineering Section. In 1979, he became the assistant manager of the Canton Technical Engineering Section.

In 1984, he moved with the company to Columbus, Ohio and took early retirement in 1986 after 30 years of service to AEP.

That year, he and Betty, lifelong golfers, moved to Seven Lakes, North Carolina and spent nearly the next 30 years in the house they built, overlooking the third hole of their golf course, playing endless rounds of golf, and enjoying retirement to its fullest.

When Ben was 68, he shot his age and recorded seven holes-in-one in his career.

In 2014, he and Betty decided to move back to Ohio to be close to family. He lived near his youngest daughter Karin who proved to be such an enormous source of support and love, along with help from his middle girl Diane

He was preceded in death by his parents, Frank and Gertrude Larson, brothers Tom, John, and Fred and sister Karin.

Busch Funeral and Crematory Services in Avon is handling the cremation. There will be a family-only service at a later date.

Betty, Karin, Claire, and Diane were lucky enough to spend his last days with him where nothing was left unsaid and, in the end, there was only love.

To order memorial trees or send flowers to the family in memory of Ben Larson, please visit our flower store.